Streaming media refers to the many different ways that you can use the Internet to enjoy movies, TV shows, music, video games, and more. With so many streaming options available, choosing the ideal streaming media player might take a little bit of research. This guide will help you find the streaming device and content services that best fit your lifestyle.

What Is Streaming Media?

Streaming media is video, audio and video games that are enjoyed on your TV, laptop, tablet or smartphone via the Internet. If you've ever watched a YouTube video, enjoyed a movie on Netflix or listened to music on Pandora, then you've used a streaming media service.

Not only does streaming media save on shelf space, since the media lives in the Cloud rather than on a disc or hard drive, it also delivers your movies, shows, sports, music and games virtually anywhere you can connect to the Internet. Plus, more and more services are adding eye-popping 4K UHD streaming and convenient voice control to their technology offerings.

Whether you're a movie buff, a TV show enthusiast, a gamer, a music lover, or you're looking for cable alternatives, your streaming media options are virtually limitless. Just keep in mind that many of these services require a rental fee or a monthly subscription. Check out some of the popular options below to find the right ones for you.

From new releases to classic films, you can find just about anything you're looking for on the growing array of streaming services out there. Most services offer movies and TV shows, but here are a few that a fan of the silver screen should check out: Netflix, Amazon Instant Video, VUDU, iTunes, Blockbuster On Demand

One of the best things about streaming TV is that you can watch your favorite shows (even many new releases) when you want, where you want. You can find everything from prime time TV to news, and even sports. Here are a few of the most popular streaming TV services: Hulu, Sling TV, Twitch, PBS, Netflix, Amazon Instant Video

Streaming isn't just for TV. Find your favorite music tracks and albums from the bands you love on one of the many available music services. Then, stream through your home theater system, or even directly to compatible speakers. Every music lover should check out these services: Pandora, Spotify, iTunes, iHeartRadio

Expand your gaming horizons by streaming select games on your PlayStation 4 or Xbox One console, on an NVIDIA SHIELD streaming player, or on your PC. Join thousands of other gamers online by streaming from popular services like: GameFly, Twitch, YouTube Gaming

Maybe you're just looking for a way to save some money by cutting the cable cord. If that's the case, your best bet is finding the right combination of streaming services to fill your entertainment needs.

Amazon Fire TV comes in two versions: a small, portable streaming stick that's ideal for entertainment on the go, and a set-top box for your home theater. Either way, you get connected to services like Netflix, Amazon Instant Video, Hulu, and many more. Some Amazon Fire TV models even support 4K UHD streaming for outstanding picture quality.

Apple TV is compatible with most of the popular streaming services — like Netflix, Hulu, and YouTube — and is the only streaming media player with iTunes. If you've purchased videos or music on iTunes through a different device, that content will be immediately available on your Apple TV. Your entire library goes with you wherever life takes you.

Chromecast is a media streaming device that plugs into the HDMI port on your TV. Simply use your mobile device to cast your favorite TV shows, movies, music, sports, games, and more to the TV you already own. Chromecast works with your iPhone®, iPad®, Android device, Apple® computer, Windows laptop or Chromebook. If you're looking for a device capable of streaming 4K content, check out the Google Chromecast Ultra.

NVIDIA SHIELD is a streaming media player that connects you instantly to content from services like Netflix, Amazon Video, Hulu, Pandora, Spotify and many more. Plus, NVIDIA players support streaming content in dazzling 4K HDR resolution, and you can enjoy the convenience of voice control. NVIDIA players also stream games from services like GeForce, which make it a great choice for PC gamers.

Roku streaming media players have a wealth of available apps (including popular services like Netflix, Hulu, Pandora, YouTube, and video games) and an easy-to-use interface. There are several Roku models to choose from, including set-top boxes and portable options that are only about the size of a thumb drive. You don't always have to add a separate device to stream your favorite content from Internet services. Many Blu-ray players, gaming consoles, and even TVs can connect directly to your home network — often wirelessly — for added convenience.

No need to leave your disc collection behind. A smart Blu-ray player gives you the best of both worlds in one affordable package. Most of the latest Blu-ray players are smart-enabled, which means they will stream media from a variety of services, including Netflix, Hulu, YouTube, Pandora and more. Many of them have the ability to stream in 4K UHD quality. Plus, they'll play your entire DVD collection.

If you're passionate about video games, the Xbox One and the PlayStation 4 are excellent streaming media options. Besides being able to play all the latest games, both consoles play Blu-ray Discs and DVDs, while offering several popular video and music streaming services (including Netflix, Hulu, Crackle and more).

If price point is a factor, the PS3 or Xbox 360 might also suit your needs. The PS3 offers several streaming services and plays Blu-ray Discs. The Xbox 360 offers streaming media services as well, but it doesn't have Blu-ray capabilities.

Note that Xbox consoles may require an additional monthly fee to use streaming services.

Smart TVs let you stream media and surf the Internet with no additional hardware needed. With a smart TV, the streaming features are built right into the TV itself, and you can use a single remote for changing channels, navigating your streaming content and surfing the Internet

If you're looking to stream your favorite movies and TV shows, but don't want to sacrifice picture quality, look for Ultra HD Smart TVs that deliver 4K resolution.

Increasingly, streaming media remote controls are being built with voice control capability. With this technology, you speak into the remote, like it's a microphone, to control what you watch. Just say what's on your mind and the streaming device will find the best match. This way you don't have to jump from one streaming service to another, or scroll through a seemingly endless lineup of titles to find the one you're looking for. And best of all, you can say goodbye to the frustration of "typing" in the name of a movie, show or album using the arrows on your remote. Voice control does the work for you. Streaming with a DVR

Another way to bring the world of streaming content to your home theater without adding another device, is to choose a DVR that offers streaming capabilities. Brands like TiVo and others, offer DVRs that not only record your favorite cable or satellite content, but also connect directly to Internet-based services like Netflix, Hulu, Spotify and more.

Other Things to Consider

Without the proper Internet speed from your provider, you might experience lag and stuttering. If you have several devices sharing a single Internet connection (including smartphones, tablets, computers, etc.) your speed requirement for streaming could increase substantially.

When it comes to streaming content, a big question is: can I get by without my cable or satellite service? With more and more content available all the time — including live TV, the number of people who are saving money by cancelling their cable and satellite service is growing. Plus, with a little information and the right antenna, you can get local channels in Full HD. Check out our links below to learn more.

Learn more about cutting the cord ›

Since the remote control serves as a link between you and your streaming device, it's important that your remote has the features you want. Several streaming media players come with a remote that looks and acts similar to that of your TV. Smart TV remotes also come with built-in buttons for navigating your streaming services, which can even include a full QWERTY keyboard. And, of course, some remotes come with voice search features.

Chromecast doesn't come with a remote at all, and instead lets you use your smartphone or tablet as a remote. This offers additional functionality that many people enjoy.

Geek Squad® is here to help get your streaming media players up and running by answering any questions you have, or by coming to your home to get everything set up for you.

If you choose to perform the set up yourself, just remember to have your Internet password handy and make sure that you have the cables you'll need. Additionally, your device will likely require you to set up an account. Follow the instructions, included or on the screen, to set up your device. 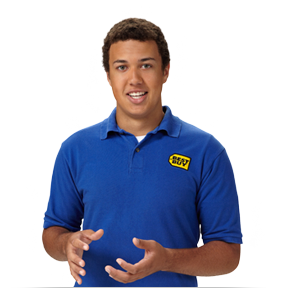 Shop Online or In Store

Find a wide variety of streaming media players on BestBuy.com. Your local Best Buy store also has a wide variety of players and other smart-enabled devices across all the top brands. Plus, our Blue Shirts are on hand to offer advice and answer any questions you may have.

Find a Best Buy store near you ›